I was having people over on Sunday, and since they all eat bacon the time was ripe to try another recipe from Zingerman’s Guide to Better Bacon – called South Carolina Red Rice.

It came out well and was quite tasty. It only had a few ingredients, and, because it’s so simple, I think it’s key that all ingredients are very high-quality – good chicken broth, good tomatoes, artisanal bacon, and the Carolina Gold rice. I was skeptical that the rice-to-broth ratio was going to work at only 1 to 1, AND, that it would be done cooking after only 10 minutes with the burner on and 10 minutes sitting with the burner off! But I stuck to the recipe, and it worked just fine.

The raw rice was sauteed for a while over medium-high heat in bacon fat, with the carmelized onions, so I think that that reduced  the time it needed to cook in the broth, and since the rice is a special kind (the grains are shorter than your average rice), maybe that reduces the amount of liquid needed. Just a guess.

I used the Arkansas Peppered Bacon, which I had never cooked with before. It had a very generous amount of pepper on it, which flavored the dish pretty strongly, but fortunately I like pepper! And the bacon strips kept their size well even when fully cooked – it’s great how these bacons are mostly meat, rather than having a lot of water, as is the case for supermarket bacons. They also gave off a nice amount of bacaon fat, for cooking the onions and raw rice in – I did not need to add any more bacon fat. The recipe said to “season to taste with salt and pepper” at the end, but for most folks it would have plenty of pepper already. If you were not using peppered bacon though, you would want to add pepper. If you don’t like much pepper, you could fish out more the pepper from the bacon fat than I did, after you cook the bacon and remove it from the pan.

I served it with cole slaw on the side (which my cousin had made, a crunchy counterpoint), made a lovely dinner. I did 1.5 times the recipe, for five adults, but probably only needed to do 1 times the recipe – we had several cups worth left over. But happily, it makes a great meal the next day too.

Ingredients:
2 cups Anson Mills Carolina Gold rice
4 medium tomatoes or 1 (14.5-ounce) can whole peeled tomatoes with their juice
8 ounces sliced Arkansas peppered bacon (about 4 to 6 slices)
1 small onion, chopped
2 cups chicken broth (preferably homemade or one of the better commercial brands: you may not end up using it all, but any leftover broth can be cooled and used later in the week)
Coarse sea salt to taste
Freshly ground Tellicherry black pepper to taste 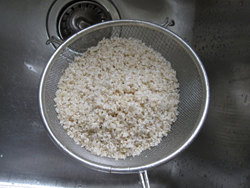 Wash the rice in cold water three times, or until the water runs clear. This keeps the grains from sticking together.

Halve the tomatoes and squeeze the juice into a medium bowl. If you’re using canned tomatoes, use the juice from the can. You’ll want about 2 cups of liquid for cooking the rice, so top off the tomato juice with chicken broth if necessary.

Chop the tomatoes and set aside. You should have about 1 cup. 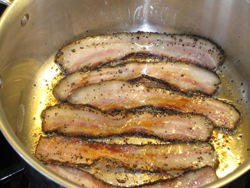 Fry the bacon in a heavy-bottomed stockpot over moderate heat until almost crisp. Remove from the pot and drain. (You’ll want about 1/4 cup bacon grease, so add a bit from your stash if needed.) 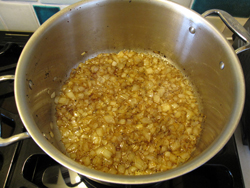 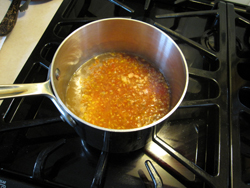 When the onions are just about ready, bring the broth and tomato juice to a boil in a medium-sized pan and reduce to a low simmer. If you’re working with unsalted broth, add 1 teaspoon coarse salt. 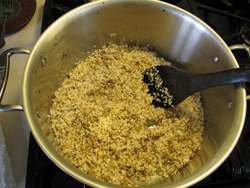 When the onions are caramelized, raise the heat in the pot a bit, add the rice and stir well. Saute for a couple of minutes, stirring constantly, until the rice is very hot and shiny.

Stir the chopped tomatoes into the rice and cook for several minutes, stirring constantly.

Add the simmering broth into the rice, stirring well. Bring to a boil, cover the pan, reduce heat to low and cook for 10 minutes. Turn off the heat. (And don’t pick up that lid to look, either, OK?) Let stand, covered, for another 10 minutes.

While the rice is cooking, chop the bacon. 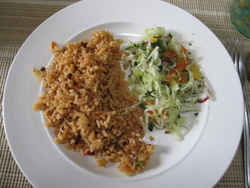 Remove the lid from the rice pot, add the bacon and stir gently. Flavor with salt and a generous dose of freshly ground black pepper, fluff with a fork and serve.