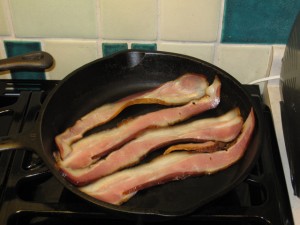 The bacon slices are very impressive – thick and meaty, a good ten inches long, and almost 2 inches wide. I pulled out my largest skillet, and they barely fit! First I fried the bacon until fairly crisp, but I did not make the mistake I made with Benton’s before of cooking it too long (it cooks faster than your conventional bacon, which has a lot of water in it), and so took it out of the skillet while it still had some bend to it – it seems to crisp up a little more even after it’s out of the pan. 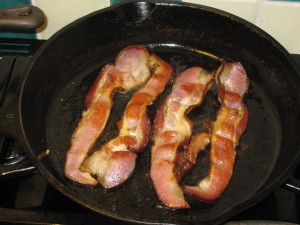 The bacon shrunk a bit while cooking, but not very much! And it left a nice amount of fat behind. I chopped the bacon coarsely and set it aside. 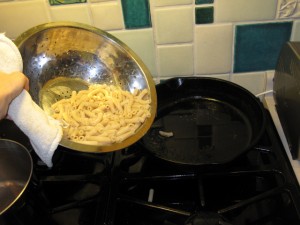 Meanwhile I’d been cooking the gluten-free rice penne pasta in a large pot of salted water. (We’ve found Tinkyada brand rice pasta to hold up the best.) I drained it while it was still a bit hard – I have to keep tasting pasta almost every minute after the first 5 minutes of cooking. I’m classic for overcooking any pasta, and especially for rice pasta it’s essential not to overcook it since it disintegrates under any kind of pressure after that. The bag’s cooking directions are ridiculous – it says cook for 15-17 minutes, and I find it’s usually done in 10. Anyway, I managed not to overcook the pasta, drained it, and then put it right in the skillet with all the bacon fat, and added in the chopped bacon too. 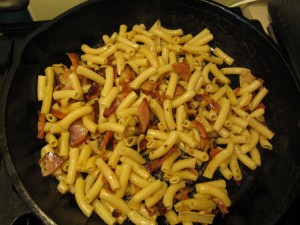 It sizzled and I found it was necessary to keep stirring it pretty vigorously – the pasta was absorbing all the bacon fat at an amazing rate, and, wanting to stick to the bottom of the well-seasoned iron skillet at the same time. I stirred it over medium heat for a couple minutes, and then ground some pepper over the top, a bit more salt, and served it into bowls. 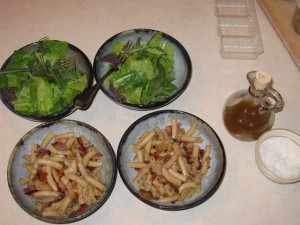 We had some fresh greens on the side, and ate every morsel! I liked the flavor a lot – an extremely simple dish but the smoky, salty flavor of the Benton’s really made it rich and satisfying. We thought maybe next time we’d toss in a bit of this or that for variety – maybe a few grape tomatoes, sliced in half – but it’s also quite good just on it’s own. As Ari mentions in the book, this really good dish gives a new meaning to “fast food”.

Bring a large pot of water to a boil. Add lots of salt, then pasta. Stir well.

While the pasta is cooking, fry the bacon in a large skillet over medium heat until done. Remove the bacon from the pan, reserving the hot fat in the skillet. Chop the bacon and stand by. As soon as the pasta is almost al dente, drain it well and add it to the skillet along with the bacon. Toss well and cook for another minute or two, so that the grease really cooks into the macaroni. Season with salt and plenty of black pepper to taste. Serve immediately in hot bowls.

“Enh,” Meg wrote me a day or so after she’d sent the original recipe (the word means “yes”  in Ojibway). “Try the mac and grease with a few big garden tomatoes cut into 1-inch cubes.” It’s incredibly simple—just chunks of really good tomato tossed into the hot bacon fat for a minute or two with some salt before the pasta goes into the skillet. “The tomatoes,” she said, should “get hot but not saucy, if you know what I mean. I did, and I made the dish and it was, again, in its simplicity, really, really good. Of course it’s only worth doing when the tomatoes are in season. The rest of the year you could gussy up your Mac and Grease by tossing in chopped vegetables or greens of most any sort, and cooking until they’re somewhere between soft and golden brown. Thinking more exotically, I want to throw chopped hickory nuts on top, too. You, of course, can do whatever you like. Like most pasta dishes, this one lends itself to hundreds of variations.