I was in the mood to cook something more elaborate this Saturday than has been my habit recently, and it was a cold, rainy, windy day, calling for serious comfort food, so this was an obvious choice. I picked up a jar of the Spicy Coffee Spice Rub (which is also available from Zingerman’s Mail Order), and some Benton’s bacon, from Zingerman’s Deli, and the rest of the ingredients from a locally-owned grocery store called Arbor Farms, which I really like because it specializes in organic ingredients and also in gluten free products.

The recipe was not difficult, in that it did not involve any tricky techniques or extra-careful cooking; it just had a lot of ingredients and several steps. First I did a lot of chopping, and here’s my assembly of the ingredients, except the chicken. For the hot pepper flakes I used my own, from some tiny round  hot peppers I grew last summer. The garlic I grew also, as well as the parsley, which is still thriving in my front yard – it will withstand the frost for a little while. The bread is gluten free, which Arbor Farms buys from a bakery in Toledo. 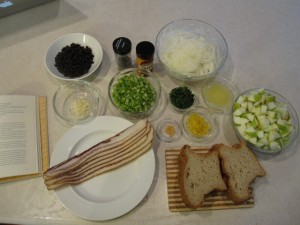 I did skip a step, in that I did not need to pre-cook any bacon; I already had a jar of bacon fat, of exclusively artisanal bacons from all my experiments, so I was confident I had some tasty fat already. I put the melted bacon fat in the bottom of a pyrex dish, and lined it with the bread, and meanwhile cooked up the onions/celery/apples/currants/lemon zest/hot pepper flakes/other spices. 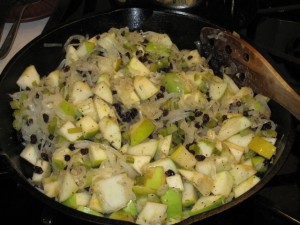 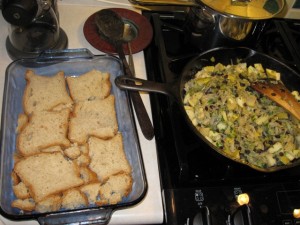 Then I put the apples/onion mixture over the bread, and prepped the chicken, rubbed on more of the melted bacon fat, and the spicy coffee spice rub, and poured the lemon juice over. And last, laid the strips of Benton’s bacon on top. 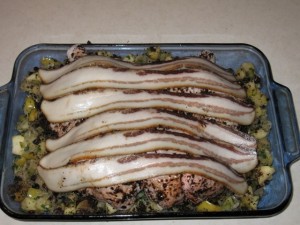 It smelled wonderful as soon as it started cooking! We also had some veggies roasting in the oven in another pan, so I had to cook it a bit longer overall, probably more like 80 to 90 minutes instead of an hour. But I did pull the bacon off to the side after 45 minutes as recommended, and the chicken skin did get nice and crispy. Here’s how it looked when just out of the oven: 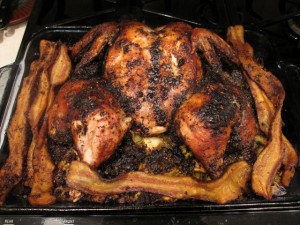 I pulled the chicken off and let it rest on a cuttingboard for 10 minutes, and meanwhile broke up the strips of bacon onto the “stuffing” and then served the stuffing onto plates. Added pieces of chicken (and some of the veggies we roasted on the side), and enjoyed a fabulous dinner. Was rich, spicy but not too hot, complex flavored and all-around good. I will make it again. It is not a dish to make when you’re pressed for time though. The full recipe is below, enjoy! 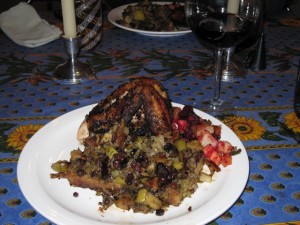 From page 200 of Zingerman’s Guide to Better Bacon by Ari Weinzweig:

My friend Lex Alexander turned me on to this recipe about 10 years ago. It’s in Zingerman’s Guide to Good Eating and has become one of the staples of our catering work here at Zingerman’s. I loved it from day one because it’s such a nice way to make a mini-Thanksgiving dinner without having to spend two days cooking: the chicken juices drip down on the bread beneath it in the roasting dish, essentially creating a low-labor but high-flavor version of stuffing (which I love!). In working on this book it dawned on me that getting bacon involved in the dish would be a big win. So here it is, Lex’s chicken take two . . . this time with bacon.

I also decided to add a spice rub that Roadhouse chef and managing partner Alex Young did for Esquire magazine a few years ago. Zingerman’s Spicy Coffee Spice Rub is a blend of ground Roadhouse Joe coffee, Urfa red pepper from Turkey, Tellicherry black pepper, cloves and sea salt. I really like the coffee, clove and bacon blend of flavors—in some strange way it makes me think about a spicy, exotic version of red eye gravy. It’s appropriate, too, since Lex’s current life revolves a lot around the very fine coffee shop—called 3 Cups—he owns in Chapel Hill, NC. Having tried the dish with a number of different bacons, we settled on Allan Benton’s—its big smoky favor and silky fat served the dish well!
It should probably go without saying, but the better the chicken, the better the dish. I use free-range birds we buy from Amish farmers in Indiana. The chicken smells great in the oven, too — the aromas of roasting chicken and bacon both make me want to eat as soon as the thing starts cooking.

2 large Spanish onions (about 1-1/2 pounds), cut in half lengthwise and sliced into thin half circles

1/2 loaf leftover country bread, such as a good crusty white country loaf, sliced 3/4-inch thick. If the bread is still fresh and soft, slice it and let it dry on the counter for a few hours before using.

1 roasting chicken (3 to 4 pounds), split in half and backbone removed

Arrange 6 of the bacon slices on a 1/4-inch-deep baking sheet. Bake for 20 minutes, or until the bacon is crisp and most of its fat is rendered. Remove the baking sheet carefully from the oven. Drain bacon on paper towels and reserve for another use. When the fat cools a bit, pour into a Pyrex measuring cup. You should have about 1/2 cup.

Heat 1/4 cup of the fat in a large skillet over low heat. Add the onion and celery. Cover and sweat, stirring occasionally, for 15 minutes or until soft.
Add the apple, currants, garlic, thyme, red pepper flakes, lemon zest, salt and black pepper. Stir to mix. Cook, covered, until the onions and celery are translucent, about 5 to 7 more minutes. Remove from heat, stir in the parsley, and set aside.

Place the entire dish in the oven and cook, uncovered. After 45 minutes or so, check that the bacon has crisped on top of the chicken. Once it has, pull it off the chicken and lay it directly onto the bread mixture so the chicken can brown. Change the oven function to broil, but continue at 400 degrees F. The chicken should be done in 15 to 20 minutes: the skin should be nicely crisped and its juices should run clear when the bird is pricked with a fork.

Remove the pan from the oven. Sprinkle the whole dish with 1 tablespoon Coffee Spice Rub and let stand for a few minutes. Remove the chicken to a cutting board and cut into quarters. Draw a sharp knife through the bacon, bread and onion mixture to break it up. Spoon some of the mixture onto each plate and place the chicken on top.

Serves 4 as a main course