I harvested the last of my potatoes, and decided to try making the Bacon Hash recipe with them. I hadn’t actually planted potatoes this year – my harvest was from the potatoes that escaped being harvested last year! I had a combination of Peruvian Purples and I think German Butterballs. 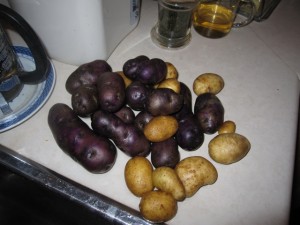 I had picked up some Arkansas Peppered bacon at Zingerman’s Deli yesterday, sliced medium-thick. 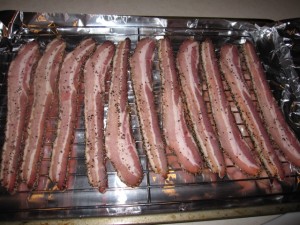 I cooked the bacon on a rack on a cookie sheet in the oven – put it in a cold oven and then turned the oven on to 350, and cooked it for about half an hour – I took it out when the bacon was still bendable, not crisp. I had the rest of the ingredients on hand. I have to admit, this was the first time I had steamed potatoes, OVER salted water, rather than boiling them IN salted water. It worked fine! Although I did cut the potatoes into large chunks before I steamed them, because of the wide disparity in sizes – some of the potatoes were quarter-sized, others were quite large.  I chopped up celery, onion, and a red pepper as called for. The chicken stock was homemade – I make large batches and freeze quarts of it, very handy to have around and so much tastier than what you can buy in the supermarket. The flour was Bob’s Red Mill All-Purpose Gluten Free, since my husband can’t eat wheat.

The cliff-hanger with this recipe was, would the roux thicken, with gluten free flour?

Here’s all the ingredients, ready to roll: 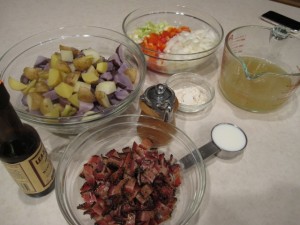 Cooking the onions/peppers/celery, in 4 tablespoons (yowza) of bacon fat,  in the largest iron skillet I have: 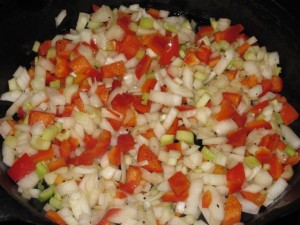 I added the all-purpose gluten free flour, and slowly added the chicken broth, and it did thicken! Not quite as much as a regular flour roux, so I used more like 1 cup of the chicken broth rather than 1.5 cups, but it was thickening: 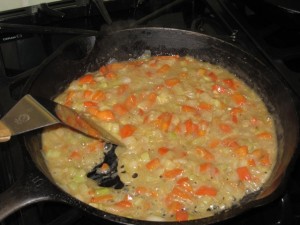 When it was nice and thick I stirred in the bacon, and potatoes, and since I didn’t have any heavy cream I used a bit of 2% milk instead. Seemed to work just fine! 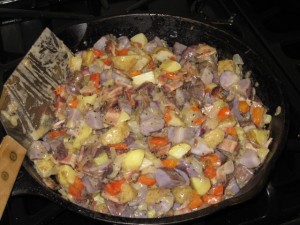 I also made a quick soup, using the chicken broth I had left over, in the blender with kale and turnip greens I had previously harvested from my garden and blanched and frozen. I cooked up some chopped onions and garlic (both of which I had also grown in my garden), in butter, and added that to the blender too with a bit of salt and a bit of celery seed. Blended it for a good 5 minutes to break down the fibers of the kale. Then put it in a pot with about half a cup of milk, heated it gently, and it was really tasty.

So, here’s dinner, my husband and I enjoyed it very much, and we have some lovely leftovers for brunch tomorrow! 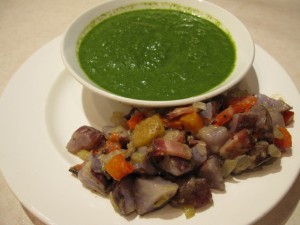 Below is the full recipe, from page  157 of Zingerman’s Guide to Better Bacon by Ari Weinzweig:

This hash has turned out to be a hit with most everyone who’s had it. It’s an excellent way to take advantage of the big flavor of top-of-the-line bacons. The bacon is the headliner rather than just a couple of strips alongside another main dish. I like making it with the dry-cured intensity of the Broadbent’s, Benton’s, Father’s or Edwards’, but it really would work with any good bacon.

You can make the recipe a day or two in advance if you like, then reheat it in a skillet when you’re ready to serve. Regardless, you’ll want to cook both the bacon and potatoes and let them cool before you move on to the rest of the recipe. Serve with rye toast and a couple of poached eggs if you like, as well.

10 ounces sliced bacon (about 5 to 7 slices), lightly cooked and chopped

2 pounds potatoes (I like Yukon Golds, German Butterballs or others of that ilk), steamed over salted water until tender, then diced with the skins on

Melt the bacon fat in a large skillet over moderate heat. Add the onion, bell pepper and celery and cook, covered, for 5 to 6 minutes, until soft.

Sprinkle the flour over the wilted vegetables and stir well to avoid lumps. Cook for another 4 to 5 minutes, stirring constantly to keep from sticking, until the flour blends with the bacon fat into a thickened roux.

Add the broth, a bit at a time, stirring well after each addition so the mixture stays smooth and creamy. The sauce should coat the back of your spoon before you add more liquid. Stir in the Worcestershire sauce.

Continue simmering the sauce over moderate heat until it thickens, about 5 minutes. Add the bacon and potatoes and mix well. Add the cream and cook, stirring, a few more minutes. Stir in salt and freshly ground pepper to taste.

Serve immediately, or cool and reheat in a skillet until you get a nice golden brown crust.