My local grocery store had ripe plantains (dark brown skins), so it was time to try this recipe. I had two plantains. I didn’t have any English dried mustard, so I used what I had. Here’s the  plantains with the mustard paste on them:

The recipe said I’d only need 2 to 3 slices of bacon per plantain; maybe my plantains were a bit large, but I ended up using more like 5 slices per. I got the Arkansas peppered bacon – I’ve become a big fan of Balinisian long pepper these days!  I did try using the skewers to hold the bacon in place: 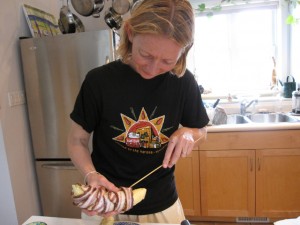 but I was too clumsy for it, or maybe I had too much bacon! But in the end I just wrapped them. (I thought about using toothpics later – next time.) 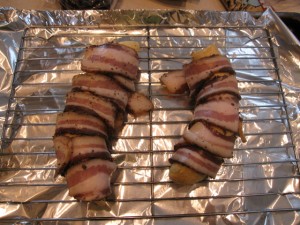 I did all the cooking under the broiler (didn’t set up the grill) so I turned the broiler temp down to 400 instead of 500 after the first 5 minutes, since the bacon was getting black on the edges. I broiled it for about 20 minutes total, and turned them a couple of times. The bacon did come a bit loose without the skewers or toothpics as it cooked, but still held together pretty well. When it was nicely sizzling and clearly done I pulled it out of the oven. 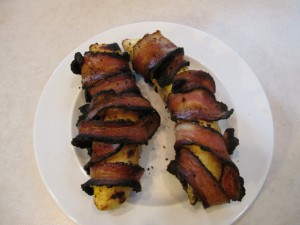 I cut them up into 1-inch chunks, and made sure each chunk had a nice bit of bacon with it, and brought it over to my cohousing community’s dinner in the common house as an appetizer. It was very well received! Very filling, due to the starchy plantains. A nice combination of textures, with the soft plantain and chewy bacon with the sharpness of the mustard to cut the starch.

Here’s the recipe, from page 170 of Zingerman’s Guide to Better Bacon:

When Kieron Hales, sous chef at the Roadhouse, first told me about this recipe, I thought it sounded a bit crazy. But, lo and behold, it’s actually delicious. Kieron hails (sorry, couldn’t resist) from England, but he learned this dish while he was working in Maine, from a Jamaican-born chef. The recipe works either on the grill or under the broiler, and you can make it with either ripe plantains or bananas. The latter will of course be somewhat sweeter, but both versions are quite good.  Kieron recommends making it with a thickly sliced, very smoky bacon—consider Broadbent’s, Edwards’ or Benton’s. It’s also very good with the long pepper bacon from Arkansas—the tropical flavors of the plantains and bananas go well with the equatorial accent of the long pepper.
So yeah, it sounds strange, but tastes darned good!

Soak a handful of wooden skewers in water for at least 1 hour or overnight. (I used 6-inch bamboo skewers, but toothpicks will work, as well.)

Mix the dried mustard and water together with a fork until it forms a paste. Let stand for 30 minutes so that the mustard’s flavor can “bloom.”

If using the grill, bring to medium-high heat. Alternatively, you can do the whole recipe, start to finish, under the broiler.

Rub each plantain with 1-1/2 tablespoons of the mustard paste and sprinkle with 1 teaspoon pepper. Wrap each plantain in bacon slices, overlapping by one-third the width of each slice as you go. Secure bacon to the plantain by inserting skewers crosswise and at angles as necessary.

Carefully remove the plantains to a baking sheet and place under the broiler for another 15 minutes, or until the bacon is crisped and the plantains are caramelized.

Take the pan from the broiler, carefully remove the skewers and cut the plantains into chunks. Serve hot, with some English mustard on the side for dipping.