A chilly Sunday afternoon seemed like the right time for this recipe. First, I started the grits. I did not have blue grits, so I used the Anson Mills slow-cooking yellow grits that I had. I used 3/4 cup of the dry grits to 3 cups water, for 2 adults, with about 1/4 teaspoon salt. I cooked them for 3 hours on very low flame. I eventually gave up on not having the bottom stuck on the pan at all – even if I stirred every 10 minutes it still eventually got a coating on the bottom. Not burned, just coated. So I knew that would be a “soaker” on cleanup… Here’s a “before” shot: 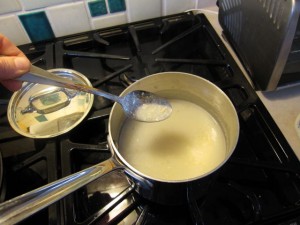 After 3 hours of cooking on low the grits were quite smooth: 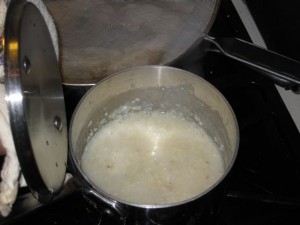 When the grits were done I started the rest of the process. Here’s the bluefish from our awesome local fish market, Monahan’s, and three slices of medium-thick Edwards bacon: 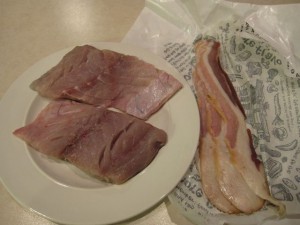 But before we get to that, a little segue – for inspiration to tackle cooking a fatty fish, here’s a recipe within a recipe – a very tasty cocktail my husband made up on the spot, he called it the “Sunday Surprise” and handed it to me as I was unwrapping the fish, was quite good: 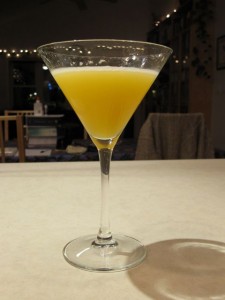 Nice. While enjoying my cocktail, I cooked 3 slices of Edwards bacon in my large iron skillet. 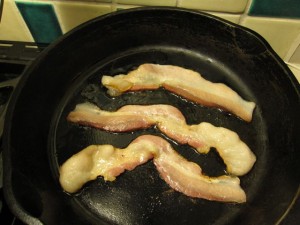 I pulled them out when done, and chopped them up and set them aside. I left in all the bacon fat, and put in the two 1/2-pound fillets of bluefish, skin side down, and covered it with my round mesh splatter-protector. Bluefish is a fatty fish, so it did splutter a lot while cooking! I didn’t time it exactly, but the fish took a little longer to cook than I thought it would, over medium heat, maybe 10 minutes. I think because the fillets were fairly thick on one end. I ended up flipping them more than once; I think I flipped it too early the first time. Resist the urge for early flipping. I tested them with a fork a few times and finally was satisfied that they were done.

While the fish was cooking, I was also steaming some brussel sprouts I had bought the day before at the farmer’s market, from a local organic farm. They only needed about 5 minutes of steaming, and then I mixed them with a little sea salt, pepper, and balsamic vinegar and they were good to go.

I warmed a couple plates in the oven, spread out some grits on each plate, and put a serving of brussels on the side, as well as some pomegranite seeds – we had a ripe one and I thought the seeds would look pretty with the brussels.

(Next time I think I’d sprinkle a little more salt, and a little pepper, on top of the grits once on the plate, but before putting the fish on top.)

Then I put the fish down on top of the grits, sprinkled it with the chopped bacon, and sat down to a feast! 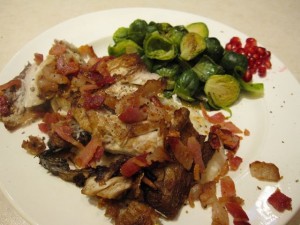 The full recipe follows, from page 186-187 of Zingerman’s Guide to Better Bacon by Ari Weinzweig:

Bluefish is one of my all-time favorite foods. But once you get off the East Coast it seems like hardly anyone knows it. This is a simple preparation, it has a great name, it’s pretty eye-catching on the plate and, most importantly, it tastes extremely terrifically good. I made it with the really superb, organic, stone-ground blue grits that we get from Glenn Roberts’ Anson Mills in South Carolina. Given that the old corn varieties ranged in color from white to red to yellow to blue and most everything in between (or even all on one cob—try Glenn’s multi-colored “speckled grits” too!), blue grits really aren’t all that strange. It’ll mess up your all-blue color scheme, but this is also good with cooked greens on the side. To get back into the blue end of the spectrum you can follow with fresh blueberries and a dollop of fresh whipped cream (no bacon) for dessert!

For the grits
INGREDIENTS
Since the cooking time is the most challenging element of this recipe, feel free to prepare a larger portion than you actually need and save some for later.

PROCEDURE
Heat the water in a heavy four-quart stockpot. Start mixing in the grits while the water warms up, stirring regularly—I find it infinitely easier to get lump-free grits this way. Add salt and stir well. Bring to a boil, then reduce the heat as low as possible. Stir a few more times, cover and cook on low for as long as you can—a good 2 to 4 hours—the long, slow cooking releases the starches and makes the grits really creamy. Once you get them cooking there’s really nothing to do but stir every 15 minutes or so.

For the fish
When the grits are good and creamy and you’re ready to eat, you can start the fish.

INGREDIENTS:
4 ounces sliced bacon (about 2 to 3 slices)(I like the dry-cured Edwards’ bacon for this one)

Fry the bacon in a heavy-bottomed skillet over moderate heat. Remove the bacon from the pan and drain, leaving the fat in the pan. Add the fish to the still-hot bacon fat in the skillet, skin side down (I think the skin is the best part!). Cook the fish until the skin is browned, then flip and cook quickly on the other side. If you need more fat, add a glug from your reserves or use a bit of olive oil. While the fish is cooking, chop the bacon coarsely and set aside. When the fish is almost done, set the grits into a couple of warm bowls. Place the fish on top, skin side down. Sprinkle the fat over the whole thing and top with salt, pepper and chopped bacon.
Serves 2 as a main course