Otherwise known as, bacon-wrapped prunes! I had made the bacon-wrapped dates with long pepper several times, but figured it was time to try this variation.

Here are my ingredients – Arkansas peppered bacon and prunes, and toothpics. 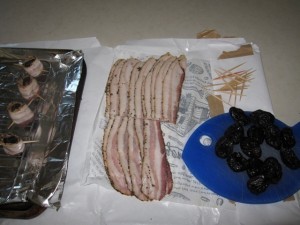 The prunes were smaller but denser than the dates, and the half-slices of bacon wrapped around sometimes more like 1.5 to 2 times. I did not precook the bacon, but those who like their bacon very well done might consider cooking it partway before wrapping them. It only took a few minutes of prep, and then my wrapped prunes were ready to roll: 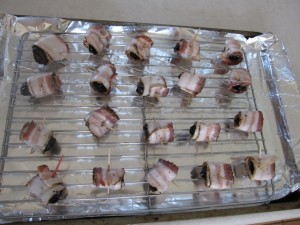 I preheated the oven itself to 500 F, then changed it to broil and put in the bacon-wrapped prunes, but lowered the broil temperature to 400 F. So it cooked a bit slower and took a bit longer (maybe 15 minutes – I flipped them at about 7-8 minutes), which I think helped cook the inner layers. Here they are fresh from the oven: 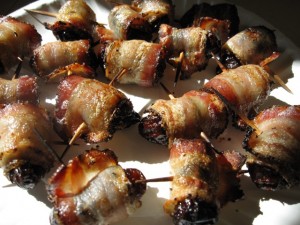 I let them sit for 5 minutes or so, and then dove in and tried one. Well, two. Or maybe three. I liked the combo of the smoky peppery bacon with the chewy, tart, complex flavor of the prunes. Bacon-wrapped dates are almost like eating bacon-candy, even with the long pepper stuffed inside. This was much more savory. The Arkansas peppered bacon went very well with the prunes, gave them more kick.  I restrained myself and brought the rest to an open house, they were very well received!

The recipe follows, from page 164 of Zingerman’s Guide to Better Bacon:

These are made in the same manner as Angels on Horseback (bacon-wrapped oysters), except that the oysters are replaced by dark Devils—in this case, prunes. Pork and prunes are a classic combination found in all sorts of big-flavored dishes from southwestern France, and this easy-to-make appetizer delivers that same wonderful flavor pairing to your guests in mere minutes! Of course you know already that I’m going to say you have to find really good ingredients to work with—my favorites are the prunes from Agen in France, but I don’t think you can get them in the U.S. anymore. If you find a variety that’s better than the standard supermarket grade, grab it. I like to make this dish with one of the smoky, dry-cured bacons to balance the sweetness of the dried fruit.

4 slices bacon, cut in half crosswise

Wrap a half-slice of bacon around each prune and then run a toothpick through the whole thing to hold it together. Place on a baking sheet, run it under the broiler and cook until the bacon is done, turning the “devils” halfway through the cooking. Again, if you want the bacon well done, you’ll do better to cook it partially through on its own before you do the wrapping.