So, this is not actually a recipe from the Bacon book. Its a recipe from Cook’s Illustrated magazine (which they called French-style pot roast), which had the irresistible combination of using bacon in the recipe, and, calling for use of a large dutch oven (since I finally acquired an enameled dutch oven last week and was eager to use it). My husband and I made this dish together, which was helpful because there were lots of steps to follow. Not difficult, just involved. Which is why I call it weekend pot roast – I could only make it on a weekend. We started at 12:45, and we sat down to eat at 6:15. However a lot of that time was just cooking time.

Here’s most of my ingredients, minus the wine and the roast. 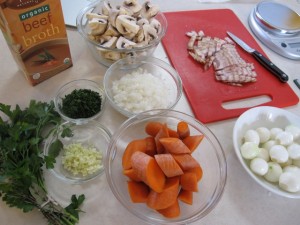 The main ingredient in pot roast, of course, was the 4lb boneless chuck eye roast. First I spent some time cutting out any large chunks of fat that were easily reachable, then salted it with a celtic sea salt and let it sit for an hour. Then patted it dry and tied it with butchers string. 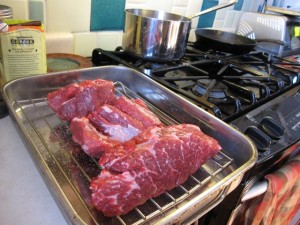 Bacon took a backseat rather than being the star of the show, but was still one of the “supports” in the building of an excellent dish! Here’s my hubbie dicing it, then it was sauteed, removed from the pot, and then I browned the meat in the bacon fat. (A splatter guard is helpful for this – the high heat needed for browning does make the fat fly.) 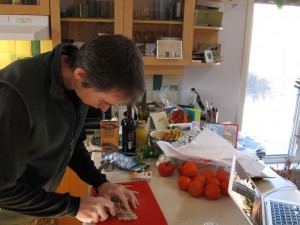 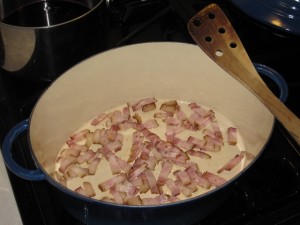 I used Vande Rose bacon, which I had never had before. Was nicely meaty and mild flavored. Those four slices resulted in a very nice amount of fat, more than I needed for browning the roast in.

Here’s the roast when I first put it in the pot to brown. 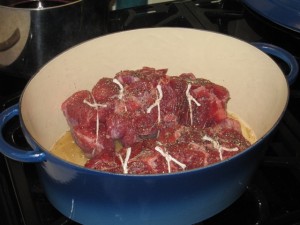 When it was browned on all sides I pulled the meat out of the pot. Then sauteed the diced onions and garlic, added the other broth ingredients (including a bottle of a Cotes du Rhone red wine, reduced down to 2 cups first, and the bacon goes back in too), and put the meat back in the pot, put the lid on of course, and baked it in the oven at 300 F for a couple hours. 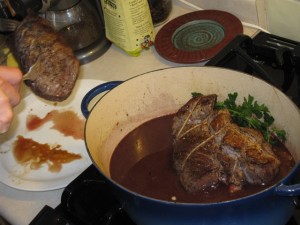 After 2 hours of cooking, you add the carrots and put it back in for another hour or so, and in the meantime you cook the pearl onions and mushrooms in a pan. 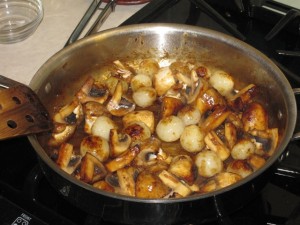 When the roast is done cooking, you pull the meat out of the sauce (temporarily), add the pearl onions and mushrooms and a little gelatin to the sauce to thicken it. Then you put it all in a serving dish. 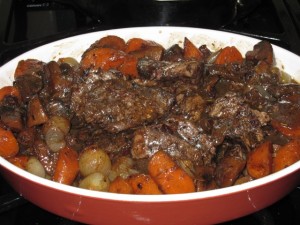 We served it with white rice and a side of steamed greens, was excellent. Very flavorful, and good textures too – not mushy, as pot roast and veggies can easily be!