We throw a New Year’s Eve party every year, and while our guests bring lovely snacks to share we always make some too to seed the food table with. This year of course I decided mine should be bacon-based. So, I chose the Benedictine with Bacon recipe from the Bacon book.

But first, I also made one of my favorites that I’ve blogged about before – the bacon-wrapped dates stuffed with a sliver of Balinese long pepper. But this time I cut the dates in half, and used 1/3 slice of Broadbent’s bacon per half-date (although I should say, Broadbent’s slices are very long, so with a standard piece of bacon you may need half a slice per rather than a third of a slice). This way I could make a lot more of them. I used the full amount of long pepper in each half though – I love long pepper! And my guests seemed to as well. They were a big hit. Here’s an in-progress photo: 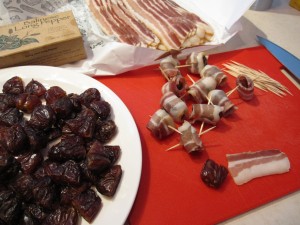 On to the Benedictine. Here’s my ingredients: 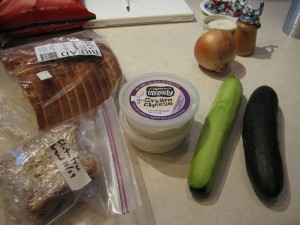 I decided to make a double recipe, but I didn’t need to – had plenty left over. Happily it tasted just as good the next day though.  I did make three variations, just in that I used regular bread for some, gluten-free bread for some, and for some I did not put the bacon on top, for the party go-ers who don’t eat pork. (The vegetarian ones were the only kind I had left near the end of the party – all the bacon-topped ones were snapped up fast!)

First you peel and de-seed the cucumbers. This always seems a bit odd, in that it seems like you’re getting rid of most of the cucumber when you take out all the “guts”, but these cukes were large and really there was plenty left. 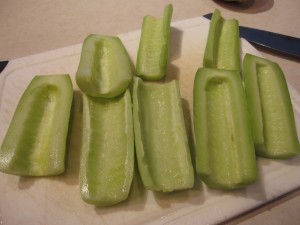 Then I grated the cucumber, and put it in a sieve and squeezed out the water. And chopped up some onion. 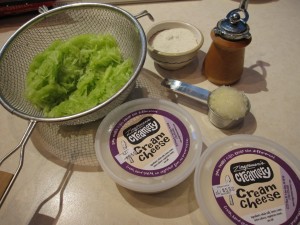 The recipe calls for 2 tablespoons of chopped onion, for 1 cucumber and 10 oz of cream cheese. I was using two cukes and 20 oz of cream cheese, but decided to hold the line at 2 tablespoons of onion and I’m glad I did – that was plenty. Maybe my onion was extra powerful. But anyway, then I put the onion, cucumber, and 20 ounces of Zingerman’s Creamery cream cheese in the food processor and blended it til smooth, and then scooped it out into a bowl, ground in some fresh pepper, and probably 3/4 to 1 teaspoon of sea salt. (I’m a salt fiend.) 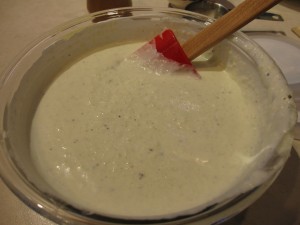 Then put it in the fridge for a couple hours. During that time, I cooked 8 slices of Broadbent’s bacon, on a rack in the oven, at 350 F, for 20 minutes or so. I watch it closely, since I’ve overcooked Broadbent’s before. It is a dry-cured bacon so has less water than conventional bacon, and cooks faster I find. And its a bit deceptive in how it looks, too – it gets stiff and dry when overdone, but doesn’t look burned, so in order to tell if its done I’m looking at both the color and the flexibility – I want to take it out while it still has some bend to it.

I patted the bacon with paper towel to take off some of the fat, and set it aside for a little while, until I was ready to assemble. Just before the party, I toasted some good white bread, and some gluten-free white bread too. (There is a bakery in Toledo that makes decent gluten-free bread that my grocery store carries, called Pure and Simple. It can’t approach the scrumptious-ness of real  bread, but its much better than some of the others we’ve tried.) I cut the crusts off just because it seemed the thing to do – maybe I was having flashbacks to a high tea I ate at Harrod’s in London when I was in high school. I put the two breads on three different plates (the third plate for the bacon-free), and took the Benedictine out of the fridge.

It had thickened some, but was still a bit runnier than I had thought it would be.  Maybe its because I was using Zingerman’s Creamery cream cheese – which has no guar gum, the standard thickener for commercial cream cheese. But it tasted wonderful – light, fresh, and cucumbery with a gentle onion bite – so it was way worth it to not have guar gum in there!

I spooned a bit onto each piece of toast (probably between 2 to 3 teaspoons per), broke the Broadbent’s up into inch-long pieces and placed a piece carefully on top, on two of the three plates, and served! 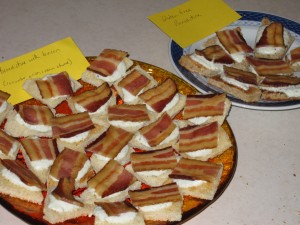 Here’s the snack table that we set out, and our guests quickly filled it with more: 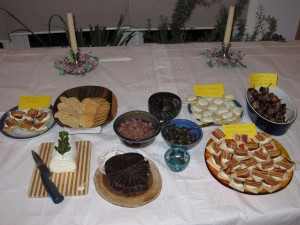 And here’s the snack table near the end of the evening – the two plates of Benedictine with Bacon and the Bacon-Wrapped Dates with Long Pepper were emptied long ago, but the vegetarian plate is still hanging on. It was eaten too though, just not as quickly. 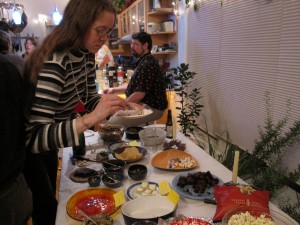 Here’s the full Benedictine recipe, from page 168-69 of Zingerman’s Guide to Better Bacon:

The credit for inventing Benedictine spread goes to Jennie Benedict, a seemingly pretty powerful personality who studied with Fannie Farmer and went on to become one of Louisville, Kentucky’s top caterers. She was the first woman to sit on a Board of Trade in the South. In 1902 she wrote a book called the Blue Ribbon Cook Book, in which she first described this spread. Over the last hundred years Benedictine has become to Louisville what paté is to Paris or baked beans are to Boston. Beyond that bit of background, I don’t have a huge heck of a lot to tell you about Benedictine other than that it’s really, really good and Louisvillians definitely do pretty uniformly seem to love it.
The first time I had it was at Lilly’s, which is one of the best restaurants in the city. It wasn’t on the menu but when I told Kathy Cary, the chef and owner, that I’d never eaten it she went straight to the kitchen and came back 10 minutes later with a plate of little Benedictine-filled finger sandwiches. I really liked the stuff, and I think pretty much anyone who likes cream cheese would like Benedictine. Every recipe calls for cream cheese, and they all have cucumber as well. Most have some onion. A few add other spices. The better the cream cheese and the cucumbers, the better it’s going to be. Many locals add green food coloring, which I think was probably a pretty common ingredient back in the early years of the twentieth century (color was an important part of the way people approached food in that era of “scientific cooking,” and the dishes of a meal were often color coded). Personally, I skip the green, but Kathy’s husband quickly reminded me that rather surreal green color is the one I’d see in most supermarket deli cases.

Part of why I like our Benedictine so much is because I’m so smitten with the traditional, hand-made cream cheese from Zingerman’s Creamery and this is a really good, regionally authentic way to eat it. I like to look at it as sort of a high-society, upper-South version of bagels with smoked salmon and cream cheese (slices of pork instead of salmon makes sense when you’re hundreds of miles from the sea). The other reason is because it’s really good with bacon—Kathy made that clear by topping each of the little sandwiches with a half slice of the stuff. Which is why it’s in this book! I’d use Broadbent’s or Father’s to stay true to the Kentucky origins of the dish.

Drain the grated cucumber in a fine-mesh sieve. Combine the cucumber, cream cheese and onion in a food processor. Transfer to a bowl and add salt and pepper. Cover and let the spread set up for a couple of hours, refrigerated, to assimilate the flavors. Remove from the refrigerator about 30 minutes before serving.
When you’re ready to serve, fry the bacon over medium heat until slightly crisp. While it’s cooking, toast the bread. When the bacon’s done, drain it (save that fat!) and cut the slices into quarters. When the toast is done, cut it into quarters as well, spread on the Benedictine and lay a bit of bacon on top. Serve on a genteel, socially acceptable platter!
Serves 4 as a side dish