Since I was home by my self last weekend I decided to make a half-recipe, I knew I would eat the whole thing regardless of if I made a half recipe or the whole thing!  I had 2-year-aged Grafton cheddar, Hellman’s mayo, a jar of organic roasted red peppers, a good olive oil from Chile, freshly ground pepper, and cayenne. Here are my prepped ingredients: 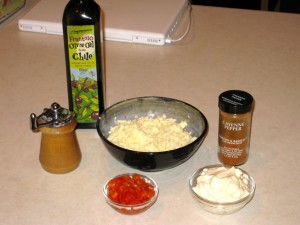 The cheddar was somewhat crumbly, I ended up kind of crushing the larger crumbles against the grater. Good enough though.  I think I used a bit more than half the amount of roasted red pepper. I did remember in time to use half the amount of cayenne, which is good – easy to add more later if needed!

I mixed it up on a bowl, and gave it a taste – very creamy and flavorful. 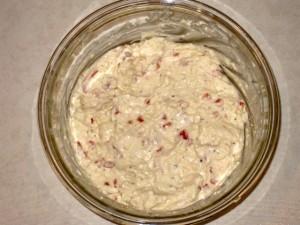 Then I covered it and put it in the fridge for lunch the next day.

Next day, I fried up 2 hefty slices of Nueske’s applewood smoked bacon: 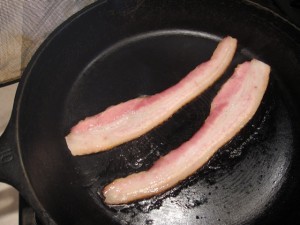 til done but not too done (a bit bendy still), and cut them into inch-long or so pieces. I topped seven gluten-free crackers (a brand called Glutino, which is very much like saltines, not like rice crackers) with a generous spoonful of the pimento cheese, laid a strip of bacon on top, put them out on a plate to admire, and then ate them all right away. 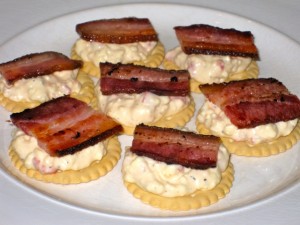 The tangy cheddar flavor went great with the sweet bacon, and the smoky notes from both the roasted red pepper and the light smoke from the bacon complemented eachother perfectly. The textures went well too – crunchy cracker, soft cheese spread, chewy bacon. A fine appetizer. Or in my case, a fine lunch.

The full recipe follows from page 167 of Zingerman’s Guide to Better Bacon:

1 cup mayonnaise (I prefer Hellmann’s up here: out West the same mayo is sold under the brand name Best Foods)

Fold all the ingredients together in a mixing bowl.

Repeat as regularly as you like. It’s addictive: as more than one person around here has said more than once, “It’s kind of good on pretty much everything, isn’t it?”

Serves . . . well, it’s kind of hard to say. A real addict could probably consume this entire recipe in a single setting. Being more conservative, let’s say it’s enough to serve 8 as an appetizer. You’ll probably have to test it on your family and friends to see how much they can eat!