Zingerman’s 4th Annual Camp Bacon is coming soon and to help get everyone prepared, we’re sharing tasty excerpts and recipes from Ari’s book, Zingerman’s Guide to Better Bacon over at the Zingerman’s Community blog. We’ll be sharing some here too! 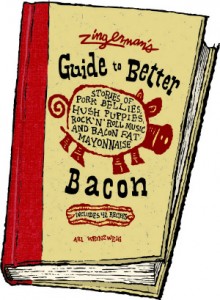 In Adventures of a Bacon Curer, one-named British author Maynard (“may-NARD”) mentions a no-longer-existent pig-related profession: the journeyman-curer. In early 20-century England this was the man who “would come down and kill the pig. He would stop overnight and cure the pig the next day, and that was the ritual. It was important that he did it correctly as that was the main meat source for the winter.”

In her Irish Traditional Cooking, Darina Allen describes a similar scene: “…on my relative’s farm in Tipperary,” she writes, “a local man skilled in the killing of pigs would arrive on an ass’s cart, bringing all the tools of the trade — a mallet, a knife, a saw, an apron, and a galvanized bath. He was highly thought of and had to be booked ahead.” I can’t say that these journeymen have disappeared entirely, but I’ve not (yet!) heard tell of one still in business.

No one I’ve asked in the U.S. remembers such curers here. The closest I came was in a story from baconmaker extraordinaire, Allen Benton: “In the hills of Virginia, it was common to have someone in the community who would go around at hog butchering time and help the neighbors slaughter the hogs and help work up the meat. They were usually paid either money or in fresh pork.”

Back in Britain, Maynard writes that there are quite a few stories about the old journeyman-curers and how they were compensated. “Sometimes they were paid in surprising ways,” he writes, “And sometimes,” he goes on, “they left a few children behind.”