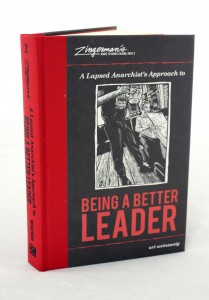 Today we bring you an excerpt from Zingerman’s Guide to Good Leading, Part 2: A Lapsed Anarchist’s Approach to Being a Better Leader. In Secret 28, Ari shares a list of 18 basic, but important, small things that leaders can (and by all rights ought to) do to be effective in their work. Unlike most of the book, the contents of the list aren’t even remotely “secrets”. Following through, being consistent, and acting in caring and considerate ways are simple and old-fashioned, but, ultimately, they’re incredibly effective ways to raise energy and build a better business. To get you started, we’ve included the first 3 points in the list:

…Thinking of staff as customers is a key component of Servant Leadership, but belief in the concept without coming through on what you committed to delivering isn’t going to win many staff members over to your cause.

Because some of us learn better by playing off the positive, while others do better being warned about what’s wrong, I decided to write my list both ways … If the A list is the stuff we all aspire to, I was going to call the second, don’t-do, side of things the B list. But as I worked on all of this, I realized that perhaps the more appropriate letter to use was a V. Which, in this case, stands for “victim.” The behaviors on the V list are things that ineffective leaders—intentions  unknown—do that create a culture in which victims rule. Quite simply, it’s all the stuff I’d suggest one would want to avoid. It’s odd; I know that no one writes a long-term organizational vision in which victims play the starring role, but somehow managers do all this stuff anyway. Bosses behave badly, they believe the worst, they act arbitrarily, angrily, and inconsiderately. They unwittingly (or maybe wittingly) work over their own staff by undercutting them, underpreparing them, and embarrassing them in public, by claiming to have said things they’ve never said, then denying claims they made a month earlier. One week they act like autocrats, the next week they’re inclusive, and in the third they’re neither—”just following the rules sent down from corporate.”

…The V list is here just to help raise our awareness; if acceptance is the first step towards recovery, then knowing that this stuff is happening is a very solid step in the right direction. From there the simple act of consciously deciding not to do them can only help make your business—and really, the whole world—a better place! It is, after all, all about free choice. Me, I’m gonna try to get on the A team.

As I told a classroom full of K-4 kids a few years ago, “Kindness is free.” A gentle hand, a welcoming tone, and a caring question are almost always appreciated. Thinking of things from someone else’s perspective, having empathy, and looking at a task from the point of view of a new employee are always helpful. Used rotely, polite words are pretty much meaningless; but saying them when you mean them, truly thinking kindly and considerately of others, means the world. If nothing else, you exude good energy, which surely will get you good energy in return, and get your entire organization going in the right direction.

I don’t know if this is so stupidly obvious as to make it unworthy of appearing here, but rudely riding over others, cutting people off midsentence, yelling unnecessarily, and, basically, just being a jerk are never helpful behaviors. Behaving this way helps no one, least of all the leader who’s doing it. To quote early 20th-century Italian anarchist, Errico Malatesta, “Hate does not produce love, and by hate one cannot remake the world.” What it does do is sow seeds of victimhood—when people can’t get heard, when no one cares what they think, when they’re shut down and shut off before they’ve even finished sharing their thoughts, then starting to think and feel like a victim comes naturally. What else can you do?

Whatever style you choose for yourself as a leader, one key is to keep living it as consistently as possible every day. One of the most important roles for any leader is to create confidence; and that confidence is, in part (though certainly not fully), based on consistency. People want to know what they can count on—the more consistent we are, the less they’re worrying about the random wackiness we’re going to do or say next. If you want to be strict, that’s fine—just be strict all the time. If you want to keep things loose, that’s lovely—just do that all the time. The point is just to be consistent with your energy, your personality, your decision style, your . . . everything.

2. Be All over the Place

By contrast, the most frustrating bosses to be engaged with are all over the place: open to input and appreciative on one day, then distant and dictatorial on the next. Sure, I’m an anarchist, but I’m not at all about being unprofessional. People can learn to cope with most anything; even undesirable behaviors done daily are probably less stressful to adjust to than a manager who’s mellow on Monday, tough on Tuesday, wimpy on Wednesday, thorough on Thursday, fun loving on Friday, scattered on Saturday, and sensitive and supportive on Sunday. This scattershot style is only productive if you’re out to produce a victim mindset in your staff. When bosses are predictable only in their unpredictability, people on the front lines don’t go for greatness, they just look for cover. No sane frontline person wants to step up and take a leadership role on a shift when they don’t know what role the leaders will be playing until they show up for work.

While it’s true that we’re not on Planet Fair (see Zingerman’s Guide to Giving Great Service for details on that one), it’s way easier to work with, and for, a manager who’s reasonable and who consistently and effectively explains their reasoning. Look, even the most spoiled souls among us know that we’re not going to get our way every single time. What everyone does want is to know that, whatever decision is delivered, there was a fair process behind it. I’m not necessarily talking about Solomon-like wisdom or breathtaking leadership brilliance—just some balanced, reasonable, ethically oriented thinking and decisions that are explicable without expletives. Whether your organizational orientation is anarchistic, autocratic, or anywhere in between, pretty much all adults like to know why we’re doing what we’re doing and why we’re asking them to do what we’re asking them to do.

By contrast, managers whose comebacks to questions about their decisions include things like, “That’s the way it is,” “Just take care of it,” “I’m in charge here,” or “ I don’t want to talk about it—just get it done,” are anything but effective. While I know there’s something going on in those managers’ minds, from the outside it sure seems like their decisions are random, driven more by mood or electrical disconnects than by depth, deference, and attention to detail. Arbitrary action at the top leads verily towards victimhood as well. When reason, reality, and what’s right have little to do with what the bigwigs decide, it’s hard not to feel like one’s future is completely out of control. Frontline folks are, literally, at the mercy of the way the management winds happen to blow on any given day. And when frontline people start basing their actions on the mood of the manager, you can be sure that the business is not benefiting.