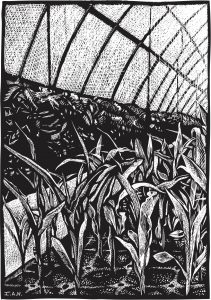 An excerpt from Zingerman’s Guide to Good Leading, Part 4: A Lapsed Anarchist’s Approach to The Power of Beliefs in Business, Secret #40.

In 1951, just about half a century after Rocco Disderide opened his business [in the building that is currently Zingerman’s Deli], CBS radio host Edward R. Murrow began a five-minute radio show under the title This I Believe. The show encouraged people from all walks of life—famous or not—to share what motivated them by reading short essays they’d written on the air. In essence, each guest was sharing beliefs about his or her own life, or about life in general. They had up to 500 words to accomplish this task.

Producer Edward P. Morgan made it clear to participants up front that the beliefs shared should be positive—the show was not a place for put-downs. It was, as is this book, a forum featuring folks who had begun the process of taking their beliefs from the unconscious to the conscious, from the critical to the constructive.

In 1952, a book was published that pulled together 100 different segments from the show. Its sales were phenomenal, exceeded in that era only by the Bible. On the back cover is written:

This book is the further extension of an idea that has already exploded into the most widely listened to radio program in the world. That idea is simple. It is that men and women will live happier and richer lives if they deliberately decide what they want from life—what they want in material things and the relative importance of moral and spiritual things. You, like most people, undoubtedly have certain rules by which you run your life. But, again like most people, you’ve probably never tried to formulate them, even to yourself. That’s where the men and women in this book differ from you. They have at least tried to do so. They have “looked in their hearts and written,” humbly and hesitantly, upon the invitation of the distinguished radio and television news analyst, Edward R. Murrow. “After all,” says he, “the only way of discovering what people believe is to ask them.” What these thoughtful people, in all walks of life, have written is here for you to read and ponder, and perhaps to emulate — in this collection of the 100 of the best of the personal philosophies of life which Mr. Murrow has discovered among the many hundreds contributed to This I Believe—on the air and in newspapers.

The series was later revived in 2005, and two This I Believe books followed. It’s from those two books that I first encountered the series. This exercise is a way to carry Murrow’s good work forward into our own lives. The success of the exercise in this format depends—as it does with our visioning recipe—on using the “hot pen” technique that I learned from Stas’ Kazmierski many years ago. It’s an absolutely essential element of what makes the visioning process as we do it here work so well (see Secret #47 for more on the subject). Because it requires us to keep writing, it pushes us through what I call the “thought barrier”—the self-conscious thoughts, self-censorship, and self-doubts that are sure to sneak in when we’re going after what we really believe in.

Using the “hot pen” means that when we sit down to write, we just keep writing without stopping for whatever time period we’ve decided upon. When we keep writing, our true, unguarded thoughts and feelings will fast outpace the self-editing. Time and again, people who use the “hot pen” technique tell me that ideas, insights, dreams, and desires emerged during the writing that they had only barely—if at all—acknowledged to themselves.

If your conscious mind starts to grow concerned over what you’re writing, override it. Keep your fingers moving. The faster you write, the better it works. Remember, what you’re writing at this stage is only for yourself, not for national publication. The exercise is an excellent way to get in touch with what we really believe and to separate that from what we believe we “should believe.” While what comes up may seem scary at first, the good news is that, per Secret #43, with a fair bit of mindful effort, we can change our beliefs when we want to. Sam Keen says, “To ask the simple question ‘What do I really want?’ is not merely risky, it is revolutionary.” I’ll piggyback on Sam’s bold statement: To ask the question “What do I really believe?” can lead to life-altering actions.

Reflection is the best route I know to track our beliefs. The challenge is to push ourselves to take time for some introspection—to really become mindful of what it is we believe and then to correlate that with what we want. If the two are out of synch, something, of course, needs to give; if what I believe is out of whack with what I want, the odds of me getting to where I want to go are slim, maybe none. And while believing that better things are to come doesn’t alone get rid of poverty, pestilence, or poor job performance, it sure does increase the odds of that happening. So I challenge myself, and invite you, to reflect for a few minutes. What do we believe about the following?

To get going, simply settle on any subject that’s on your mind. (Don’t worry— you can address other areas of interest later.) Get out some blank paper or open a new file on your computer and pick a subject to focus on: yourself, a colleague in the company you work for, some issue the country is facing. With your specific subject in mind, start things rolling by writing out the simple statement: “This I believe about X . . .” And then just keep writing for at least 15 to 20 minutes. The “hot pen” technique—both with this free-form examination of beliefs and in the visioning process—works wonders.

Part 4: A Lapsed Anarchist’s Approach to The Power of Beliefs in Business

Secret 40: The Power of Beliefs in Business